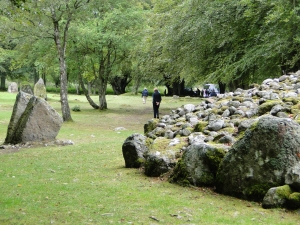 Formal tours are a great thing. First and foremost, someone else is driving. If they are good, they will not only drive, but back-up, turn around and generally maneuver in places that you were certain they could not all for the sake of the perfect photo. We had all of that and more in Hugh Allison.

Hugh was doing an Outlander tour. For those of you who have read The Outlander series, you will know what this means. For those of you who have not, it simply means that we were able to see places relevant to the book, some real, some that just fit the author’s fictitious places. Hugh was a wealth of information, and a published author. He had a wonderful sense of humor, and I would be amiss if I did not say that if you ever needed a tour in the Highlands of Scotland, Hugh Allison would be your man.

I also should mention the others who were on the tour, if only because we crashed at the last minute. Michelle was a huge fan of the Outlander books, her husband and son, not so much. Mark and Josh hung in there with admirable patience, considering the subject matter. Mark was quick-witted and generally happy, and Josh was a model of politeness, gallantly taking the back seat without complaint.

We started at Clava Cairns,  There are three separate cairns here, two for holding the souls of the dead until they continue on their way in the afterlife, 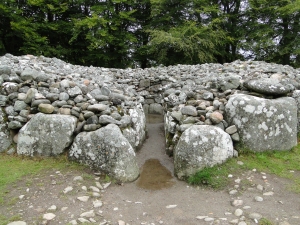 and one for cremating the bodies. They also served as a giant sundial and calendar for the people who lived 3500 years ago. If you visit during the December Solstice, you can see the sun stream through the opening at sunset.

There are also various standing stones, one of which is split. 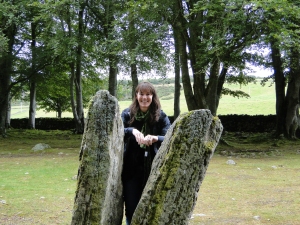 For those of you who have read Diana Gabaldon’s Outlander series, I did not hear the stones scream at me, which was something of a disappointment. Maybe I should come back on All Hallows Eve and try again.

There is a fourth rudimentary stone ring which gives the appearance of an attempt to create something like the other rings, though it doesn’t meet the mark. Scientists discovered  it was an attempt to create a ring like the others, 1000 years later by  studying peat samples below the surface of the earth. These peat samples indicate that there was a period of seven years where this part of the earth was covered in darkness, and nothing grew and many things died. 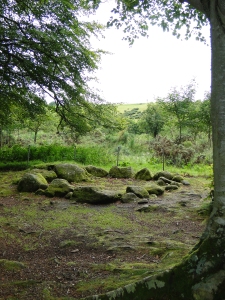 The event that caused this was the eruption of a volcano that permanently cooled this region, as it had been a warm and temperate climate prior to the eruption. When the sun finally was able to show through the ash cloud, we had entered into the bronze age, where the inhabitants didn’t quite have the knack for creating the stone monoliths from a thousand years prior.  After tromping round Clava Cairns and discussing time travel theory, and then whether or not we could actually cope with being transported 200 years back (Hello!?, it’s fiction!) we headed to Culloden Moor. 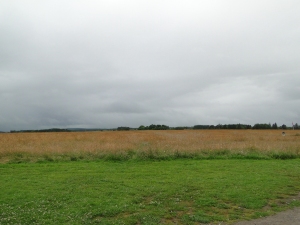 Outside the visitors center, the wall has a brick that stands proud for each Highlander that fell. 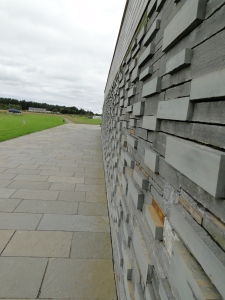 Inside the visitors center, the visitor gets the perspective of the British on the left side of the exibit, and the Highlanders on the right, and follows the developments leading up to the fateful battle that occurred on April 16, 1746. At the end of the walk through there is a 360 degree theater where film plays with a reenactment of the battle with the Scottish Highlanders stretched out roughly halfway around and the British opposing, with the visitors standing in between to understand the perspective.  The battle itself lasted less than an hour, but within the first three minutes, 700 Highlanders lay dead on the cold, wet moore, while the English army lost only 50, with 250 wounded. The Duke of Cumberland, wanting to make sure such a rebellion never happened again, sent troops all through Scotland to burn the cottages and dwellings, frequently shooting Highlanders regardless of (and sometimes not even asking) their sympathies, and turning women and children out of their homes to starve. He was nicknamed The Butcher. All in all, a very sobering experience.  Once you exit the theater, there is an exhibit with weapons to handle that were commonly found during that historical time. 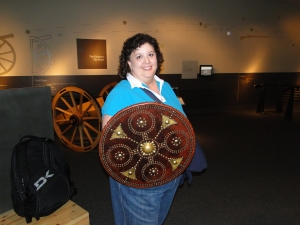 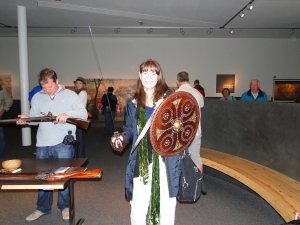 After we finished the exhibit, we headed outside to walk the battlefield.  The technical gadget used to walk to the battle field looked like a smart phone, but was a satellite receiver.  All over the field were places that triggered the device to play audio that explained the particular place you were standing in and what happened in the battle at that place.  Diagrams showed on the screen in explanation as well as picture of the key people in the battle and a brief description of their significance. 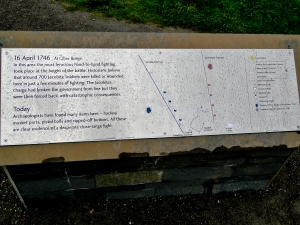 Hugh Allison knew quite a bit of the history and many stories from the tradition of Highland Storytelling through his work as a private tour guide and from his time working in the visitors center at Culloden.  One of these stories is about Leanach Cottage which was occupied by a family of five in 1841.  Through the years it was alternately abandoned and occupied until Bella MacDonald moved in and stayed until 1912  when she died at the age of 80.  The building is made of stone, but has dirt floors and a roof of heather. 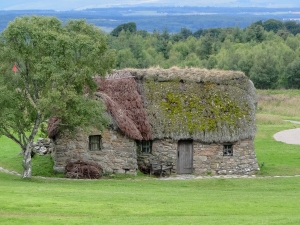 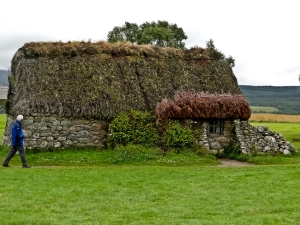 The Well of the Dead is one of the most famous markers on the field among the clan grave stones.  It marks the place where Alexander MacGillivray fell in battle, and also one of the sites of heaviest casualties. 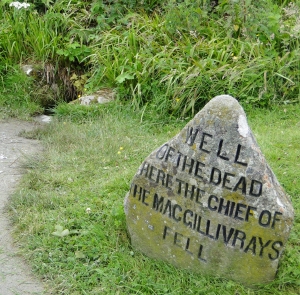 Here is where I also found good displays of the famous Scottish Heather, which had just started blooming in early August. 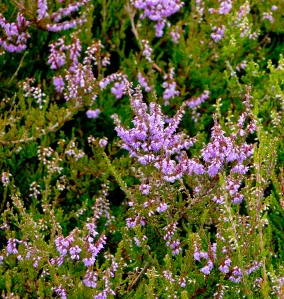 The Thistle has been the national emblem of Scotland since the reign of Alexander III in the 13th century, and it also grows wild on Culloden. 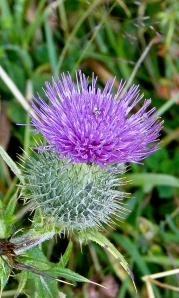 After the battlefield, we headed to Cromarty Firth but stopped at a Clootie well.  What is a Clootie well? A Clootie well is a place where ailing souls go to rid themselves of their infirmities.  Different theories abound. It must be done on the 1st of May; you must circle the well three times chanting a Celtic prayer, or possibly dip the article of clothing associated with the illness, ie; stocking from an ulcerative foot,  in the well before hanging it on the tree. No matter how many theories there are regarding the placement of the clothing, the one certain thing that everyone seems to agree on is one must never remove something that you didn’t hang, because if you do, you will take on the ailment of the individual who did put it up. 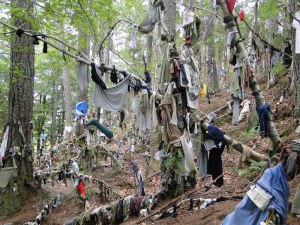 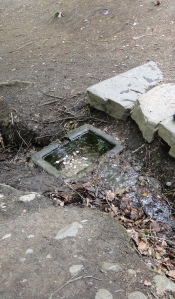 Tomorrow I will continue with Part II of the Outlander Tour, to include Cromarty and Beauly.