The morning after arriving in Inverness, John asked us what we planned on seeing.  He then asked if we were fans of the Outlander series books, to which I said yes, Robyn not so much a fan was more tentative.  He asked if the next day we might be interested in joining an organized “Outlander” tour with another family staying at Ardconnel House.  We told him with some trepidation that we might be interested, but we didn’t want to trespass on the other family’s outing.  He pointed out that the more people that go the cheaper it would be, and thought we’d be a good match.  We agreed to let him negotiate the deal, and he could let us know that evening. 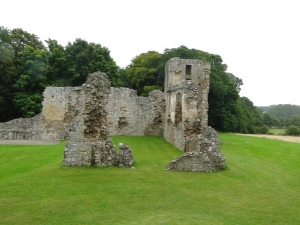 We did a self guided tour of Culloden and Clava Cairns, but since we would end up going back the next day, I plan on covering those in the next post.  Spynie Palace was built in the 12th century on  Spynie Loch and is 36 miles East of Inverness. It served as the Bishops seat for the Bishops of Moray for 500 years.  It was a fortified dwelling, and was referred to as Spynie Castle.  There was unrest about it’s location, as it was far from market and difficult to defend, hence the added gun holes in 1500.  Eventually it was moved to Elgin Cathedral 2.5 miles west to the city of Elgin.  Here is a link to read more about Spynie Castle.

There were two things that amazed me about this place.  The first was that it had been on Spynie Loch–a lake–where now there is none.  Over time the silt and earth filled in the Loch naturally creating dry land. 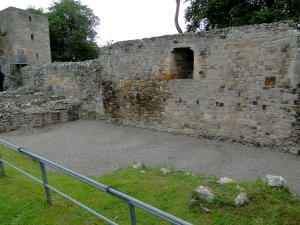 The second was the kitchen space, which was amazingly large, and sufficiently impressive to allow them to entertain any number of important people over the years.  James I, James II, James the IV and Mary Queen of Scotts all have stayed at this place that must have been quite impressive at one time. 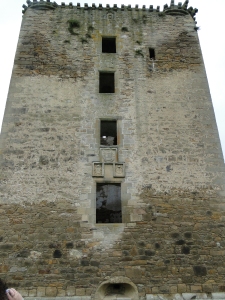 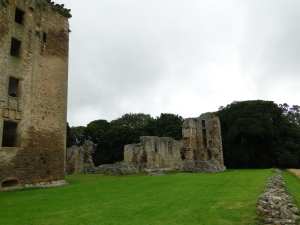 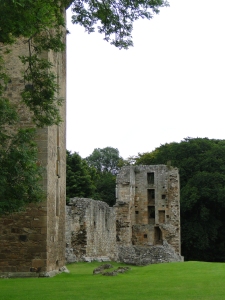 I found photography difficult here with the camera I had brought with me.  I used a Sony PAS, with a really good zoom and panoramic capability.  I had thought at the planning stages that it would be easier than my Cannon EOS 50, because it’s lighter and easier to travel with, and the panorama function is so easy.  While the photo’s are not bad, I didn’t have a lot of flexibility in my shots.  Wide angle was out of the question, and while panorama is a nice feature, wide angle for some of these might have been a better choice.  Just another reason to go back with the right camera.

I found the same pangs of regret at the next stop, which was Elgin Cathedral in Elgin.  A very wide, flat open space, it was difficult to photograph to my liking.

As I mentioned earlier, Elgin is 2.5 miles from Spynie, and we were pleased that when we arrived it was still open.  I had been continually surprised by the short summer hours of most things in the UK, closing promptly at 5:30 when there is still so much daylight left in the day.

Upon arrival and parking, which turned out to be really easy as we were able to park at the curb right across the street, we were amazed at the entrance. 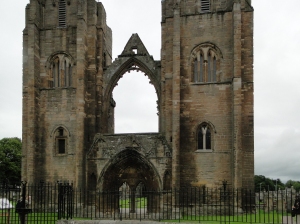 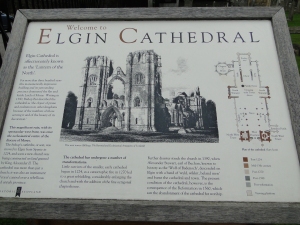 The first church on this site was built in the 13th century, but burned with much of the town in 1390 on the orders of Alexander Stewart, Wolf of Badenoch.  For the next 200 years it was slowly repaired until it fell in 1560 during the reformation when the congregation moved to Saint Giles in Elgin and the lead roof was stripped and the bells were taken.  It is known even now as The Lantern of the North.  Without a roof, it’s degradation became more rapid, until 1807 when a cobbler took measures to halt further decay. 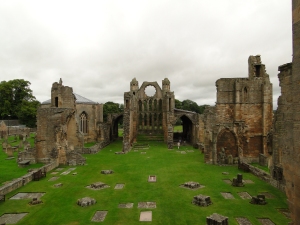 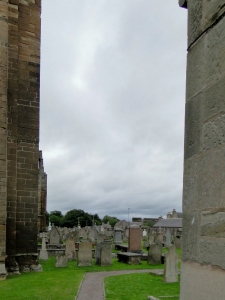 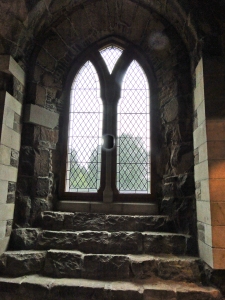 They have a wonderful gift shop on the premises where the employees were willing to help us with anything.  This included pulling out a map and showing us wonderful places to drive and see.

“If you take this road here, it is the most beautiful drive.  You won’t be disappointed,” the young girl behind the counter said.

Robyn and I squinted at the tiny road on the map that most certainly did not look like an A road or even a B road.

I cleared my throat.  “Um, those aren’t single track carraigeways, are they?”

The young girl looked up, nonplussed as if this shouldn’t matter.  “Well, yes they are.”

We smiled.  “I think we are done with anything that doesn’t have two lanes.  But thank you for the suggestion.”

She truly looked disappointed.  Maybe I’ll give a try the next time I’m there.